Best surf ever for the Revolt Summer Surf Series!
As we all well know that the surf lately in SoCal has been..well hopefully you all well know by now!  Amazing contests up and and down the coast, to showcase some amazing talent, but the true amazement was Mother Nature blessing us all with some great surf. The 2nd installment of the four part series, RSSS’s third annual event went off with great surf, and some pretty amazing performances to boot as well!
Dustin Cuizon, Volcom team rider showed up and walked away with a amazing 5’5 Aviso Lost…round nose fish.  If any one of you have seen the new Lost 5’5 Redux video, you’ll know Dustin will put his to the test, like the rest of the Aviso “test pilots” on board.  Justin McBride showed up to boost as well, coming in second, and winning “the huge air of the day” award as well.  Rounding out the pro-am, as always in a battle, Eric “McAir” McHenry came in third, with our good buddy and Aviso Cole 5’0 trunk board winner from last year in fourth place, Gavin Sutherland.
Thanks again to all the sponsors, and to all the competitors who showed up and represented.   Of course a huge ”shaka” to  the hundreds of fans who line the beautiful Crystal Pier in Pacific Beach to witness pretty much, the best surf contest ever held at the famed local!  Check in next month on August 22nd to see who will walk away with another Aviso Surfboard~The Worlds Leader in Carbon Fiber Surfboard Technology!
Peace-DW 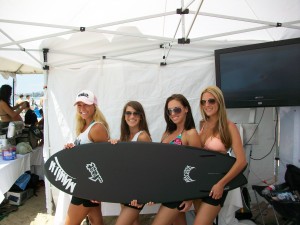 The ladies holding up the grand prize! 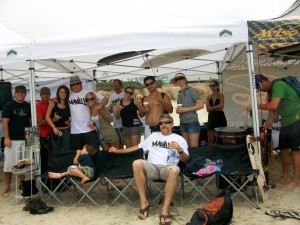 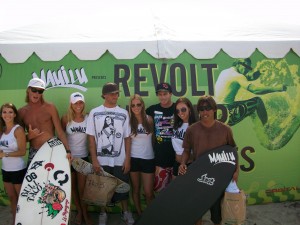 Justin McBride showed up and took second in the Mens as well as the prize for best trick!

The girls stepped up to the challenge as well at the Revolt Surf Series! 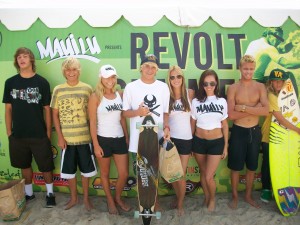 Even the groms came down at put on a show!